Septa fights you on ice cases. They do everything they can to avoid paying you any money. If you are going against them or one of their contractors, the lawyer has to be prepared to go all in.
Septa hires contractors for snow and ice removal at some train stations. These contractors didn’t do a good job and my client got hurt. All my clients knew is that he fell on ice at the Septa train station. Because Septa is a government agency, when a lawyer sues them for an ice case, Septa responds that they are not responsible for people being injured on ice on their property. If the lawyer lets them get away with it, that’s all they will do.

What To Know When You Sue SEPTA 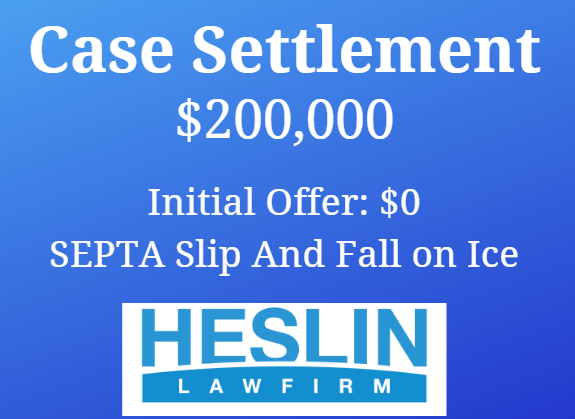 When you sue Septa in an ice case, you must start issuing subpoenas and taking depositions of Septa supervisors and managers and find out which contractors they used for snow and ice removal on the day that your client fell. You must sue the contractors and bring them into the case. Eventually, Septa and these contractors will start producing tons of documents showing they did a great job of cleaning up the ice and snow before your client fell, and your client is either lying, or they did everything they should have and they’re not responsible for your client falling. It amazes me how detailed their records can be on how much they did and how good a job they did. This to protect them and not the public. They should probably spend less time on record-keeping and more time on snow and ice removal.
The lawyer then must start issuing subpoenas and taking depositions of the contractors and their employees to find out what they actually did. In my client’s case, I found out that the contractor was actually a landscaping company, and they used one of their landscaping foremen to run their snow and ice removal contracting business. He had little to no experience in the proper techniques of snow and ice removal. When there is a snowstorm, this landscaping foreman would get a phone call. He would then go to the parking lot of one of the local home improvement stores where he would hire day laborers and then the inexperienced landscaper and his equally inexperienced day laborers would go to the train station and try and perform snow and ice removal.

Our Philadelphia SEPTA Lawyer Can Help You Today

An experienced lawyer will be able to expose the many mistakes that were made on the day the client fell. For instance, you’ve probably heard of rock salt. It is actually sodium chloride and it’s the most common type of ice melt used for deicing roads. Although it’s affordable and widely available, it doesn’t work particularly fast and it’s only effective down to 20°F.
There is another ice melt called calcium chloride. It’s one of the most effective and can melt ice and snow as low as -25°F. However, it is a pricier option.

So, when the inexperienced landscaping foreman that ran the snow and ice removal crew doesn’t know the difference between rock salt and calcium chloride. And doesn’t know that rock salt is ineffective below 20°F, then an experienced lawyer is on his way to a big win. The initial offer was 0. The client recovered almost $200,000.