I have been getting lots of complaints recently from people who settled their case with another law firm and are shocked that they are getting a lot less than they thought. Most of the time, it is because they did not carefully read or understand the fee agreement they signed with their lawyer.

Almost all fee agreements in personal injury cases are some type of contingent/contingency fee. This means the lawyer will only be paid if he wins the case. In fact, lawyers usually highlight that part of the fee agreement with something like if there is no recovery there is no fee. I can tell you I have been handling personal injury cases for over 35 years, and just about every lawyer/law firm operates that way. That is no big deal.

The most important thing you must look for any fee agreement is whether the lawyer will be taking his fee from the GROSS or the NET.

If the lawyer/law firm is taking the fee from the GROSS settlement, that means they are taking their fee off the top. That means all the costs, medical bills, and liens of any sort are coming out of your end.

As I said before, I get these calls a lot. Unfortunately, I have to tell the people to look at their fee agreement, and if they signed a fee agreement that the lawyer/law firm is taking their fee from the gross recovery, then there’s nothing they can do. They entered a legally binding contract.  I am not pointing to anyone, but it seems like some of the lawyer/law firms that do a lot of television and other types of advertising are the ones that have the GROSS fee agreements. I guess they need the money to pay for their advertising.

Recently I got a call from an elderly woman who told me that she had agreed to settle her case for $75,000. She went on to say that out of the $75,000 she only got $1210.69. Even I was amazed. I had her drop off her paperwork because I wanted to see it. The paperwork she dropped off included her fee agreement which, sure enough, was a GROSS fee agreement. The paperwork also included the Distribution Sheet. After a lawsuit is settled, the lawyer/law firm is supposed to prepare a Distribution Sheet that identifies everything about the settlement, including the settlement amount, the amount the attorney gets, the costs, medical bills and liens, and finally the amount the client gets.

Here is a partial copy of her fee agreement. I redacted anything that might identify the woman or the law firm. Sure enough, it is a GROSS fee agreement. 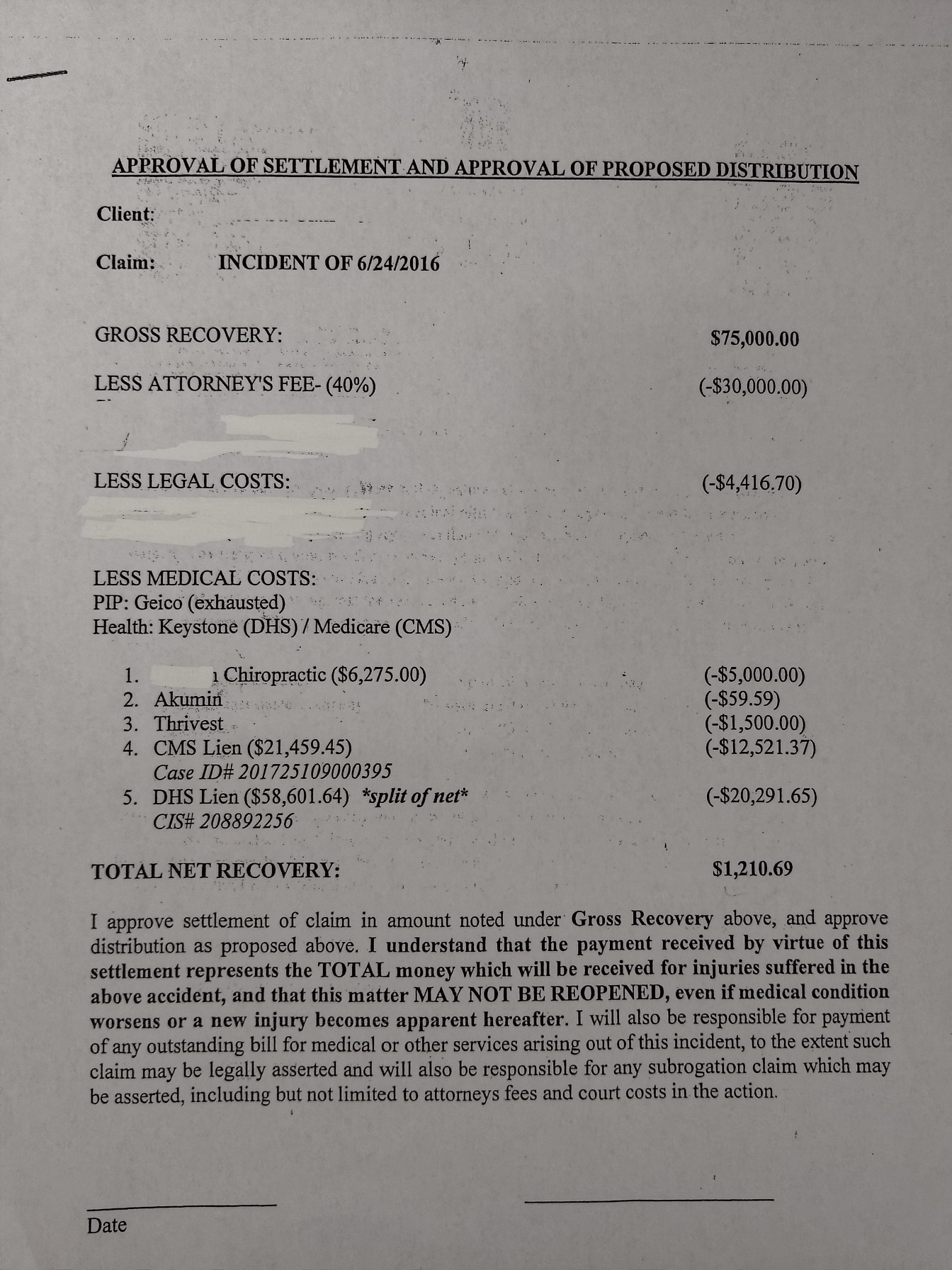 We then get to the medical costs. Let me give you a brief explanation. In an automobile accident case, there is usually $5000 of what are known as personal injury protection benefits that go toward payment of the medical bills. This $5000 is above and beyond the settlement value. However, a lot of times that $5000 gets exhausted/used up, as it did in this case. After that, the bills have to be submitted to either a private health insurance company or state or federal insurance. If there is no insurance, then the bills have to be paid out of the settlement. Sometimes the insurance will only pay part of the bills and the rest have to be paid out of the settlement.

This is an example, a rather drastic one, of what can happen when you sign a fee agreement which gives the lawyer/law firm a percentage of the GROSS settlement. It is legal. It is ethical. I just do not think it is fair and I do not do it. I believe that the lawyer/law firm should take their fee from the NET settlement.

This way all the costs and medicals come off the top, and the lawyer/law firm takes their fee from what is left. If that were done in this case, the woman would have received approximately $18,500. I am not even giving my opinion on the settlement amount or the fairness of the number of costs and bills. I do not know enough about the case to give my opinion. HOWEVER, if the woman signed a NET fee agreement and not a GROSS fee agreement, she would have gotten $18,500 instead of $1210.69.

Let Us Help If You Were Injured

A knowledgeable Philadelphia injury attorney with experience in personal injury cases can help you navigate a legal contract you have received. Schedule a consultation with Gary Heslin of the Heslin Law Firm today and let us know how we can help you on your road to recovery.